Are you RF Aware?

This summer we undertook a project to recover several flat roofs at a Surrey school, one of which supported 3 telecommunication masts. Many believe that Radio Frequency (RF) or Electromagnetic Radiation Awareness is primarily for telecommunication industry employees, however there are many other workers that should be made aware of this dangerous hazard.

It is the joint responsibility for persons who control access to roof areas and any principal contractors or subcontractors undertaking works on those roofs, that no person should access a roof with radio antennae without first receiving proper training and information on the risk of RF radiation and the controls needed to avoid over-exposure.

Because of this, new UK legislation (The Control of Electromagnetic Fields at Work Regulations 2016, the general provisions of the Health & Safety at Work etc. Act 1974, and the Management of Health and Safety at Work Regulations 1999) applies to put a responsibility on the employer to assess and if necessary limit, its workers exposure to electromagnetic radiation. Under this new legislation employers could face employee sickness, enforcement action and industrial tribunals.

So what is RF radiation?

RF just doesn’t just get omitted from transmission antennae but also from faulty connectors and damaged feeder cabling anywhere around the transmission antennas. Workers may apparently feel they are safe if they are a long way from the antennas but could still be stood next to a cable run that is leaking RF!

The major sources of RF radiation are radio, television, and mobile telephone transmission antennae but workers also need to be made aware that a simple vertical ‘whip’ antenna is radiating 360 degrees with the strength of RF fields being greatest at its source, but diminishing quickly with distance.

The RF current does not penetrate deeply into electrical conductors but tends to flow along their surfaces; this is known as the skin effect. For this reason, when the human body comes in contact with high power RF currents it can cause superficial, but serious burns called RF burns; usually in the form of a “pin prick” in appearance but which can run deep into the tissue and take a long time to heal.  Other effects can be:

Currently there is no known link between exposure to RF radiation and an increased risk of cancer.

Rooftops housing radio transmission antennas must have signage from the provider explaining the risks; the signage should identify the radiation source and list the contact numbers of all companies controlling transmissions from the roof or work location.

Signage should have a message panel advising the following three key safety facts:

There are four colours which identify the levels of severity: 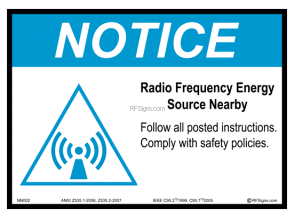 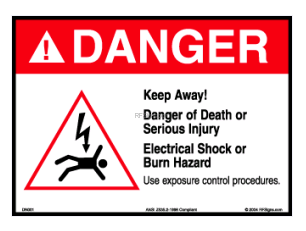 Should the transmitter not be visible, a telephone call to the provider should be made
to determine the location of the device. Please note that some transmitters can
be hidden from view, e.g. within church steeples or false chimneys.

The preferred method of controlling exposure to RF radiation is to cease transmissions. However, as control over the transmission signal is usually remote from the worksite, employers need to ensure that they are able to continually verify the strength of the signal during any works.

Persons working on or near to telecoms transmitters should be issued with a body worn field monitor which can monitor field levels in real time and over a broad frequency range. RF monitors, must be calibrated and worn to be seen.

Should the field monitor be activated, the works should be immediately halted and the workforce moved to a safe area.

The actions of hazard identification and risk assessment needs to be taken prior to workers accessing any area where RF radiation is likely. “NO GO” areas where maximum exposure levels may be exceeded should be clearly determined, identified and documented prior to commencement of the proposed works. This may be by measurement, or on the advice of a competent person or from the warning notices.

Safe Work Procedures should be developed giving consideration to all identified risks, including RF radiation with all workers inducted and trained. Where workers have a need to enter a “NO GO” area, they should be directly supervised by a competent person who has undergone training in safely managing an RF radiation environment. 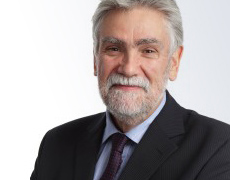