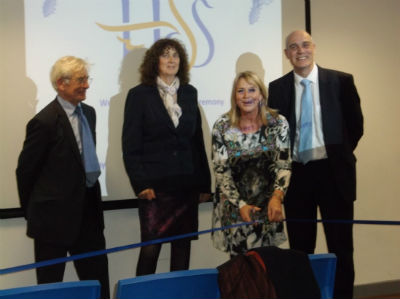 The school’s won £1.8 millon in a successful bid to the DfE which was completed in time for the September term. The new facilities include a new 6th Form Centre incorporating a large study room and offices, separate IT Suite and a 6th Form Coffee Lounge. The new block also houses a brand new Design & Technology Department consisting of two Resistant Material rooms, IT Hub, Food Technology room, Textiles and Graphics rooms. The facilities are state -of-the-art with all the latest in specialist equipment.

Fern Britton said she was delighted to support the school which is such a wonderful asset to the local community. Michael Jones, Headteacher, said that the new build had been the product of two years of hard work but that the school saw this as the first of many projects which it is developing to deliver the premises which the students and parents of Holmer Green Senior School deserve. The project was planned in partnership with the design team at Synergy and built by Neville’s. Wendy Goodinson, Synergy, said that out of all the school projects she had been involved with this one was special because it would allow students an opportunity to develop in vocational subjects and looked forward to seeing the next celebrity chef or Vivienne Westwood emerging from the school. Peter Henman, Neville’s, further stated that this project was so important as it supports those students looking to develop a trade which they could grow into a career. As the Headteacher says, “This is just the start!”