St John Bosco College is a voluntary-aided school within the trusteeship of the Salesians of Don Bosco and the  Archdiocese of Southwark in the London Borough of Wandsworth.

The College was established in September 2011 after the closure of the Salesian College in Battersea and John Paul II School in Wimbledon.

With the existing buildings at the Wimbledon site unsuitable for modern day use it was decided to relocate within a new building at the former Salesian College site in Battersea. Originally this scheme was part of the ‘Building Schools for the Future’ programme, however after changes to Government capital spending, this project was consequently cancelled.

As a last resort the Archdiocese of Southwark and the Salesians of Don Bosco stepped in to form a Joint Trust to facilitate the rebuilding of the College on the old Salesian College site in Battersea in what is typically known as a ‘Land Grab’ deal. This is where the land is handed over to a developer in return for (in this case) the construction of a new school building.

Synergy were appointed as Employers’ Representative to the Joint Trust working in close association with both them and their Lawyers, Agents and Head teacher throughout the duration of this project. Synergy’s advice on this £25m project was comprehensive ranging from the negotiation of the initial development agreement through to practical completion sign off. The modern new facilities feature flexible teaching accommodation, a Sport England-compliant sports hall, an external games area, and a double height chapel. 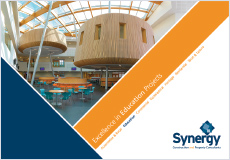