Our Projects: South Porch to the Parish Church of St John Baptist

Built circa 1480 the South Porch to the Parish Church of St John Baptist known also as the Town Hall dominates the Market Place and is arguably Cirencester’s most spectacular building.

The proposed conservation philosophy balanced the conservative with the realistic, i.e. respecting the inherent importance of the historic fabric, whilst also recognising the need to make the building safe and durable to avoid repetitive repairs.

The £550,000 capital cost was financed through private funding and generous family bequests, the HLF contribution being approximately £210,000. Funding was secured largely by the efforts of the project’s Campaign Team including significant input from Synergy.

Synergy’s team, who have worked tirelessly on this project, have ensured that as well as maintaining the philosophy of conservation for this project, it was also delivered on budget preserving the safe and viable future of this iconic building. 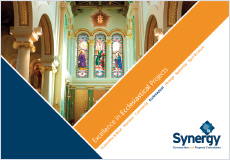 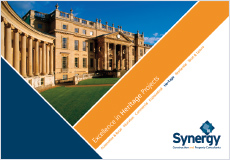