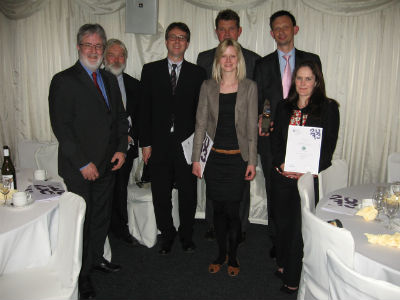 Synergy Bare, Leaning and Bare are proud that their recently submitted project, the Town Hall in Cirencester, has just won a prestigious award for building conservation from the Royal Institution of Chartered Surveyors (RICS), South West region. Competing against several high-quality entries in the South West and Wales region, the Town Hall project was praised by the RICS judges for its thorough up-front research, philosophy of repair and the skill and enthusiasm of the project team.

Duncan Ball of Synergy Bare Leaning & Bare, who acted as quantity surveyors on the project, collected the award on behalf of the project team. The architect responsible for the overall design and specification was St Ann’s Gate LLP of Salisbury and the works were carried out by Carrek Limited of Wells.

The £550,000 capital cost for this project was financed through private funding and the Heritage Lottery Fund. Funding was secured largely by the efforts of the project’s Campaign Team with significant input from Synergy Bare, Leaning and Bare.